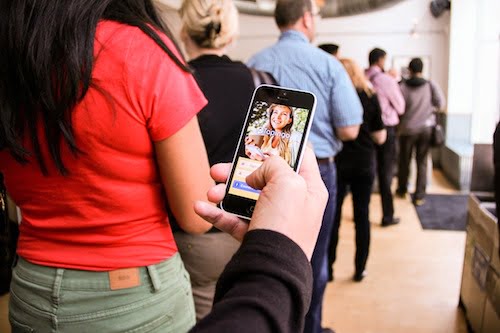 The 8:30 am class might have been a mistake. But to keep from falling asleep in art history John Q. Student simply pulls out his smart phone, opens an app, places an order for the espresso with an extra shot, along with a bagel and cream cheese, and picks it up on his way to class with time to spare.

For more than 60 campuses across the U.S., this scenario is a reality thanks to Tapingo Inc., a provider of online and mobile food service solutions.

Instead of waiting in line for food, a student can open the app on their smart phone – iOS or Android – choose where they want to eat on campus and place an order. The app will then give them a ticket number and let them know how long it will be before the order is ready.

Tapingo enables campuses to outsource mobile and online food ordering on campus. Students can use the university’s declining balance accounts, payment cards or PayPal to make purchases with their mobile app or through a web site, says Ben Anderson, director of campus sales at Tapingo.

Tapingo runs the systems for the university and the merchants with 24/7 support. The company monitors all locations to stay ahead of potential issues. For example, if the printer is running out of paper or the device is unplugged, Tapingo notifies the venue to prevent any service disruptions, Anderson explains.

But each campus decides how the program is setup. For example, Tapingo has institutions across the country using its system but whether funds from a student account can be used with Tapingo at another campus is up to the student’s institution. Also, some universities don’t offer a declining balance account and Tapingo works with them to create an account or enable use of other payment types.

Tapingo also provides an off-campus component for its clients that already have a program in place. The system enables students to use their declining balance accounts to make purchases in the community.

For those colleges who have meal plan points instead of dollars Tapingo can offer meal exchanges or meal equivalencies at certain locations, at certain times or with certain limitations. Tapingo can enable those options directly through the application.

Tapingo offers different payment options for universities wanting to use it service. Instead of upfront costs and annual fees, most universities choose to have Tapingo take a small transaction fee on each order to offset launch expenses and ongoing support and marketing costs. If the program does well, the total cost to the campus will increase but the university also will see financial, operational and customer service benefits, Anderson says.

Beyond dining at University of Santa Clara

The University of California at Santa Clara started using the service in January 2012 and has taken it beyond food service, says Nirmal Palliyaguru, director of the ACCESS Card Office at Santa Clara University. All of the school’s dining services are hooked up to Tapingo as well as more than 20 off-campus merchants.

Students can hook up their campus card account to Tapingo as well as credit, debit and PayPal accounts.

Santa Clara has seen increases in the total spend per purchase thanks to Tapingo. Instead of having a barista ask if the customer wants an extra shot with the latte, the app asks the question instead. “With the app I am more likely to buy something with a higher dollar value,” Palliyaguru says.

After a soft launch in January 2012, Santa Clara did a full rollout for the following fall semester, informing incoming freshmen about the app and offering a coupon. Since then, word of mouth has been enough to educate students.

As expected, Santa Clara food service has had to adapt to the new option. Workflows had to change, but Santa Clara had some champions in the department who eased the transition, Palliyaguru says.

Santa Clara pays a fee to Tapingo to use the service. Whether the higher ticket order has offset that fee, Palliyaguru wouldn’t say. “The return we see in student satisfaction is far greater than the fee we pay Tapingo,” he says.

Another early adopter of Tapingo was Northern Arizona University in Flagstaff. Tapingo is accepted at 20 on-campus dining options, including Einstein Bagels and some late night fare, as well as some off-campus locations, says TC Eberly, director of campus services and activities at the institution.

The app is popular on campus with 10,000 unique users out of the 19,000-student population, Eberly says. From January to mid-May there were 150,000 orders placed via the app.

As the app’s popularity has grown, so too has the need for students to know when their orders are going to be ready. Northern Arizona decided to use a feature of Tapingo called Active Cashier to keep track of orders and let students know when food will be ready for pickup, Eberly explains.

Active Cashier tracks when an order is entered and fulfilled and automatically provides the customer with the wait time for an order pickup. For example, if a student is leaving class at noon and places an order on his way to the cafeteria, the system will know that it’s a busy time of day and give the student an estimated pickup window based on that data. “We do our best to communicate with the customers and let them know that the order might not be ready as soon as they show up,” Eberly adds.

The university is also fine-tuning how meal plans are accepted via the app at some of its dining partners. The meal plans work on a virtual punch card basis, with students that sign up for the platinum plan receiving more punches per week.

This has caused some complexity when the plans are being consumed outside the campus-run dining halls. For example, the standard meal plan could be used at Einstein Brothers for a coffee and bagel with cream cheese, while the school’s platinum meal plan can be used to get the coffee as well as a breakfast sandwich and fruit cup, Eberly explains.

Northern Arizona has been working with Tapingo to have better integration of these disparate meal plans into the app. There is also a declining balance account that the university offers, and to add even more to the mix, students can also opt to use a credit or debit account as well.

The university tells students about the app during freshman orientation so they are ready to use it when they arrive on campus in the fall, Eberly says.

Northern Arizona was already looking at running a kind of online ordering system in house before it found Tapingo, Eberly says “The road blocks and complications for PCI compliance make it difficult for a school to run it in house,” he says.

Eberly hasn’t done a financial analysis of the cost of Tapingo versus what the service brings in, but he says student satisfaction trumps it all. He points out that today’s college freshmen were born in 1996 so they have the expectation of online ordering.

University of Southern California keeps it on campus

This fall will mark a full year since the University of Southern California rolled out Tapingo, says Kris Klinger, director at USC Hospitality. The university has 26 retailers on campus signed up to take orders, including California Pizza Kitchen, Starbucks and Coffee Bean.

USC has found that students upsell themselves when using the app, adding an extra side order or item when using the app, Klinger says. Overall locations where Tapingo is enabled have seen greater sales. “We have a Starbucks and a convenience store (that does not accept mobile ordering) and the store sales have dropped while Starbucks has increased,” he explains, adding that people like making purchases with the app.

Working with some of the big brands was a challenge at first, Starbucks and Coffee Bean in particular had to be convinced to accept orders from the app, but it has paid off, Klinger says.

USC students can use the university’s declining balance account to pay for purchases as well as other payment cards. The school hasn’t done a cost analysis on Tapingo yet, Klinger says. “My gut says it’s pretty close to breaking even,” he explains. “It’s driving transactions, increasing check total and the students expect this so it’s keeping them happy.”