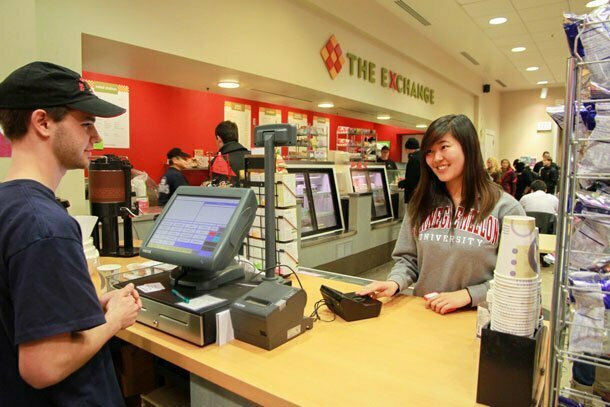 Off-campus programs inhabit an odd place for colleges and universities. Institutions can sometimes build a modest revenue stream from these programs and students seem to enjoy using their student ID card at places beyond the campus.

But on-campus food service and retail locations have not always been thrilled, arguing that off-campus options can siphon money away from them. This concern has waned in recent years, however, as evidence emerged supporting the notion that with more choice comes more spend across the range of acceptance points.

Some campuses run these programs internally – identifying the merchants, deploying terminals and cutting checks or electronically settling. Others outsource the service to a campus-card provider or other third-party servicer.

Both options are viable, but come with their own considerations. With the outsourced model, for instance, campuses might see a smaller share of the fees paid by participating merchants, while universities that run their systems in house could have to hire additional staff to run the program. Marketing; staffing; terminal deployment and maintenance; customer support; settling, reporting and reconciliation are all areas that should be considered when evaluating which way to head.

The Catcard services office at the University of Vermont is a busy place, serving 12,000 students and 2,500 faculty and staff at its Burlington, Vt. campus. The off-campus program started in 1999 with a takeout restaurant, pizza parlor and juice bar, says Amy Suprenant, business manager for the Catcard Service Center.

The university now has 107 merchants on board and runs off-campus programs for four other neighboring colleges. “We have everything from taxis, retail stores and a dentist,” Suprenant says. “We didn’t just want food options.”

The program includes three large supermarkets in the area, the last of which came on board this year. Fast food, convenience stores and groceries are the top three merchant categories, Suprenant says.

Leading up to the original launch there were some concerns about students using their campus ID and declining balance account to buy alcohol or tobacco products. To at least ease this concern, restaurants and merchants with more than 51% of sales from alcohol are not eligible to participate in the program.

Even with the popularity of the off-campus options, on-campus sales have not suffered. Suprenant says 55% of purchases are still being made on campus, on-campus dining levels continue to grow and they haven’t seen a drop off.

The university’s CatScratch program is used for off-campus purchases, for vending and to make other purchases on campus, Suprenant says. Students can deposit funds on the card at the card office, at one of the many kiosks around campus or online. Students are charged a $3 convenience fee if they add funds online.

At its peak in 2008 the university saw deposits of $1.8 million into the accounts but that has dropped to average around $1.2 million in recent years. “We attribute the drop off to the bad economy and the campus’s decision to start accepting credit and debit cards,” she explains.

Merchants that want to participate in the program must fill out an application. If accepted, the merchant pays a $250 setup fee, and is charged 6% for every purchase Suprenant says. Merchants get monthly statements and all accounts are reconciled on the 15th of every month.

The success of the university’s program sparked nearby colleges to come calling to see if they could get on board. Vermont hosts the same off-campus programs for nearby Saint Michael’s, Champlain and Norwich colleges – another 6,700 students in total.

The university does its best to educate incoming students about the program during orientation as well as promote the program throughout the academic year. The card office has weekly “Friday freebies” for anyone who likes the program’s Facebook page. They are also exploring the idea of coupon books and a loyalty or rewards program for students.

While running its own off-campus program might see daunting, the university has only good things to say about the experience. “There’s really no downside, it’s nothing but pros,” Suprenant says.

Located in central Michigan, Albion College decided to contract with CardSmith for an off-campus program, says Jordan Rich, director of information and user services at the college. Albion was already deploying a CardSmith campus card program, including door access and on-campus dining, and decided that the addition of an off-campus program just made sense.

The 1,400-student college has 15 merchants signed up, Rich says. The school identified specific merchants it wanted to include, and CardSmith pursued others. “We disapproved a couple local merchants who tried to join because they were liquor stores,” he adds.

Merchants are charged between 3% and 5% of each purchase, Rich says. They also have to purchase a separate point-of-sale terminal that only accepts the Albion ID. Albion students making purchases at the store have to go to that specific line to make their purchases.

Dining plans are separate from Albion’s Briton Bucks declining balance accounts, Rich explains. This eased concerns that the college’s on-campus food services had about losing money to the new off-campus program. Briton Bucks are also used for laundry, vending and other on campus purposes.

The program is popular on campus, with 70% of students funding the Briton Bucks account, Rich says. There is typically around $300,000 in accounts at any one time during the school year.

Albion rolled out the programs to improve the student experience, Rich says. “We also wanted to integrate the community more into campus,” he adds.

It’s been nine-years since William Paterson University of New Jersey rolled out its off-campus program with CBORD, says Tino Rexach, IT and Enterprise Network Services at the university. Today, there are 21 merchants participating in the program, Rexach says.

As with Albion, community outreach seems to be a priority for Paterson, as outside of a McDonald’s, 7-11 and CVS, all other off-campus participants are local merchants.

The initial reasoning for an off-campus program at William Paterson was born out of necessity. The student union was going to be closed for six to 12 months for reconstruction and school officials wanted to offer options for student dining. Looking off campus to help feed them seemed the best option.

The university now offers students a few options for dining, Rexach explains. They have dining halls with all-you-can-eat options and a food court. The university offers both meal plans that enable a student to get a certain number of meals each day in the dining halls, as well as a declining balance account that can be used at the food court or in the off-campus program.

The service is basically a GrubHub type service, tailored specifically for William Paterson, and offering both on- and off-campus food options. The students will be able to open an app on their mobile or go to a web site, see the dining options and menus, place an order and pay with their campus card.

William Paterson helped beta test some of the early versions with CBORD and saw success with the pilot, Rexach says. “Within three months, three of the merchants were seeing more traffic with GET Food than with GrubHub,” he explains.

The university will be promoting the new features during orientation for incoming students and heavily this fall when students return to campus. The institution already offers a mobile app for students to use, and the online food ordering system will be added to increase the app’s functionality.

Whether a university decides to run its own program or outsource to a campus card provider or other servicer, off-campus programs seem to be something the student expects rather than an added bonus. Moreover, the advent of mobile and online ordering seems likely to expand these programs to new heights in both convenience and usage as students gain the ability to use their campus ID in new ways and at more locations.