A mobile app, some golf carts and a renowned burrito are proving that campus food services can change with the times. Many argue that the traditional model of institutional food service -- student ID cards, board plans with declining balance, on-campus locations and limited availability – can no longer compete in the modern marketplace. But at the University of Arizona, it is not just competing it’s thriving.

Arizona Student Unions partnered with mobile ordering provider Tapingo three years ago in the fall of 2013. “We were responding to the lines,” explains Todd Millay, interim director for UA Student Unions, referring to the campus’ ever-growing food queues. 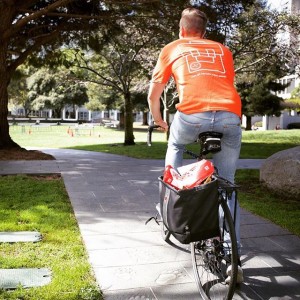 Millay oversees 30 retail outlets on the Tucson campus and serves between 25,000 and 30,000 meals per day. “Everyone still eats at the same time, so with mobile ordering, we were trying to be responsive to lines,” he says.

It’s a sensible strategy, because if you can increase throughput at the moment when lines normally become problematic, then students won’t walk away and go to your competition.

“How do we maximize the same six registers at the Chick-fil-a?” he asked. It was the kind of question that led to the mobile ordering trial.

Since that successful trial three years back, mobile ordering has expanded to 80% of the university’s retail outlets. As Millay explains, the solution is best suited to declining balance users and locations that service them. Board plan users and more traditional dining hall locations don’t benefit from mobile ordering to the same degree, as they tend to be eat-in and self-service in nature.

Enter the Highlands Market breakfast burrito, a staple of any Wildcat’s life.

“The ticker machine never stops,” says Millay, referring to the printer that pushes out Tapingo orders in the Highlands Market kitchen.

This hints to the advantage of mobile ordering. The receipt ticker tells the kitchen that someone wants to pick up a burrito soon, and while they’re not standing at the counter right that second, they will be in a specified number of minutes. These minutes are the key to reducing the lines Millay mentioned, increasing throughput and enticing customers to come back for more.

“We call it the anticipation throttle,” he says. “Getting the order to the staff 14 minutes earlier gives us time to prepare.”

It seems to be working. Across the university’s outlets, mobile ordering already accounts for 15% of all orders.