CR80News was onsite at last month’s Transact360, the annual Transact Campus user group conference. Great speakers, great networking, and a packed technology exhibit hall highlighted the three day event. Here are a few of the highlights from the expo: 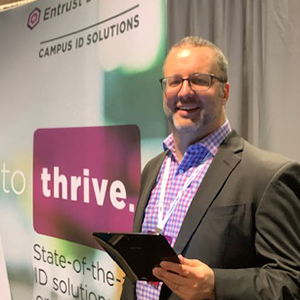 Retransfer printers, direct-to-card printers and distributed enrollment and issuance were the topics on tap for Entrust Datacard. Product Marketing Manager, Martin Hoff, said that modern card issuance is about “busting the lines.” 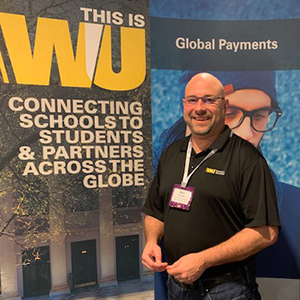 International students have added challenges when it comes to paying tuition at US institutions, and managing international payments is where Western Union thrives.

“We are fully integrated with Cashnet to help international students move money to pay tuition,” says Ben Kavalec, the company’s US director of sales.

Students make payments in their local currency and the institution gets paid in US dollars. The benefit for the student and their family is that they get preferential Western Union corporate rates for the transaction as it’s a domestic payment for them rather than an international wire. If they went through their local bank to initiate the transaction, they would pay as an individual for an international wire at the highest rate.

Institutions also pay for receiving these international wires and the Western Union offering reduces these costs as well. 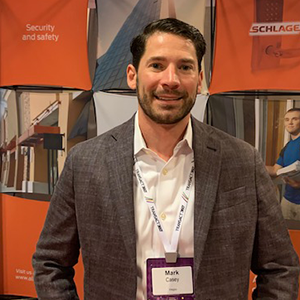 Access control readers that can consume both the mobile credential and the physical card were on display at the Allegion booth. The company’s AD and NDE reader lines both accept mobile credentials, and Allegion can help campuses accept both iOS and Android devices in PACS environments.

Mark Casey, Director National Electronic Sales, says the biggest change this year is that people are making decisions when it comes to mobile first. “People were talking at the 40,000 foot level about what mobile could do, but now its shifted to action – how do we it and who do we involve.” 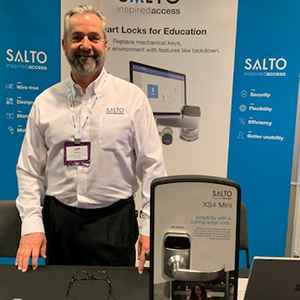 The mantra for access control provider Salto Systems has always been “data on card,” because they cleverly used the users’ cards to transport system-level data to their network of readers. Today that mantra has expanded to “data on phone,” as they recently rolled out mobile credential acceptance within their large deployed infrastructure at the University of Santa Clara.

Jeff Wood, National Manager OEM at Salto, explains that their readers connect wirelessly not to find out if a cardholder has access to a door (they already know that based on data held on the card itself), but rather for managing system functions and enabling lockdown situations. “Data on card or data on phone still works with power outages as our locks are battery powered,” he says.

It’s also a cost effective install. “In a place like New York City, the end user cost could be $8,000 per door for a wired solution, but this gets that down to less than $1,000 and a five-minute install.”

A wide variety of biometric readers – from basic fingerprint-only readers to multi-factor devices and even contactless scanners – are serving higher ed installations thanks to IDEMIA.

The MorphoWave Compact is an option that is growing in popularity for use in unlimited access dining locations, rec centers and libraries, says Dave Gershenson, National Sales Manager for IDEMIA.

Gershenson has also seen a growing trend of scanning in and scanning out of academic facilities like libraries, as well as other on-campus locations. “In athletics, biometric access has become a recruiting tool to show off facilities to potential athletes,” he says. 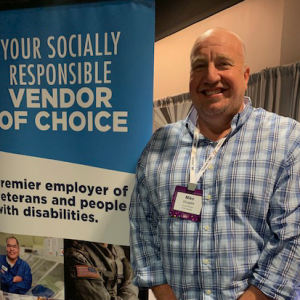 Many Transact readers and devices are made by a leading contract manufacturer that also happens to do good for our society.

PRIDE Industries employs 3,400 people with disabilities across 16 states. That is more than half PRIDE’s workforce, so it’s not just a PR move, but rather a core part of the company’s socially responsible mission.

According to Mike Douglas, PRIDE’s General Manager, PRIDE gives people a sense of purpose and gainful employment and that improves lives. Next time you use one of your Transact devices on campus, feel good knowing that lives were changed in its creation.

NACCU supports members and gets ideas for future education 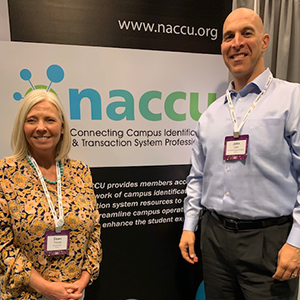 “We like to support our partners, and Transact360 and other user group events provide a great opportunity to connect and engage with the market,” says Dawn Thomas, Executive Director, NACCU.

At the booth, Thomas, alongside membership engagement manager, John Ogle, met with a number of campus administrators – both members and potential members – to share association plans and learn what campuses need in terms of support. 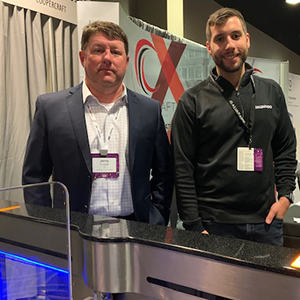 The sleek turnstiles from Alvarado would make a beautiful addition to any campus facility, and CooperCraft has installed them for Transact and other campuses.

The optical barrier turnstiles are ideal for rec centers, student housing, dining halls and libraries, says Dan Gardner, Security Sales for Alvarado. He says that the turnstiles detect wrong-way entry and enforce one-to-one access by eliminating tailgating. It can also reduce staffing needs by removing the human the need for a person to scan ID cards at dining and other locations.

“We have turnstiles at Georgia State University providing data for their analytics on rec center usage,” explains Jerry Cooper, CooperCraft CEO. “They are great looking pieces and they can be customized with etching for each institution.” 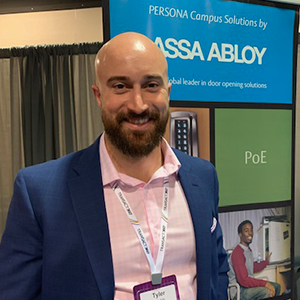 This spring, a new reader will join the Assa Abloy family that includes a keypad for situations when dual authentication is desirable.

According to Tyler Webb, Assa Abloy Regional Manager, some campuses are seeking added security for residence halls. “We are hearing from institutions that are beginning to question if a single credential is enough for securing living spaces,” he says. “This new reader is designed to address that need.” 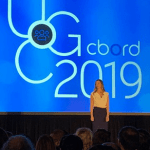 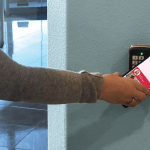