Handheld computers and PDAs extend on campus, off campus, and system admin functions

As wireless connectivity becomes the norm rather than the exception, colleges are finding greater uses for handheld PDA-type devices that can simplify everything from taking food orders to checking students in during an event, such as a football game.

Meal vending, picnics, field trips, photo or event verification, even shuttle buses all lend themselves to handheld usage. One thing’s for sure: colleges certainly have a variety of wireless devices from which to choose.

But for a handheld system to be effective, the campus must first have an ID system in place. “This system is the backbone and provides the means to make the magic happen on the handheld,” explained Vision Database Systems’ Emil Bonaduce. VDS, which has been supplying ID card and tracking solutions for more than 15 years, uses several handheld devices from various manufacturers. “Our applications are written to be compatible with devices running on the Pocket PC Operating system,” he added.

There are basically three levels of handheld suppliers for campus markets:

Bottom line purpose for any handheld used on campus is to pull up information stored in a database for the card just scanned by the device, said Mr. Bonaduce.

“Handhelds provide an excellent way of ensuring that students do not defraud a sporting event system, for example, by passing their student ID to others to gain free or discounted admittance,” said Mr. Bonaduce. The company’s PockeTracker Red/Green application “can allow one ID one entry (flashing a green symbol) and then deny entry to all subsequent presentations of the ID (via a red symbol),” he added.

Added General Meters’ vice president, Jeff Zander: “They’re used to verify someone who says they paid for an event. The card is swiped and a photo is displayed along with a pass/fail status. This keeps students from giving their card to a friend if they know a second level of verification will be a photo ID.” General Meters produces the Pocket 1Card as an extension of the company’s University One-Card System. Pocket 1 Card is a software package and a card reader designed to operate on a PDA using the Microsoft PocketPC operating system.

Another possible use “is the tracking of attendance for a special or cultural event that is required for select students,” said Mr. Bonaduce. “Perhaps a famous speaker will be presenting and all history majors need to attend the lecture, yet it is open to the entire campus. By placing a handheld per point of entry at the auditorium, quick and accurate attendance data can be gathered without disrupting traffic into or out of the auditorium. This data is then complied into reports that show at a glance who was in attendance so that proper credit can be given.”

General Meters has a handheld that can be used as an access device, he said. A list of people who have access rights to a facility–be it a dormitory or a lab–is downloaded to the device. As the student enters, the card is swiped or an account number is manually entered, and a pass or fail light determines if the person can gain entrance.

General Meters’ Pocket 1Card, like other applications, can accept meal plans. “No pre-wiring is needed and no setup is required. The appropriate data is downloaded to the Pocket 1Card which will then read a student’s meal plan eligibility,” said Mr. Zander.

Campus card provider CBORD offers two varieties of handheld card readers “allowing users to process transactions at any location, regardless of power or network connectivity,” said the company’s president, Bruce Lane. “The readers are frequently used at athletic events, picnics, concession sales, conferences, and other on- and off-site events. In online mode, transactions are processed in real-time, using a wireless network. (Alternatively,) transactions are verified against an offline database downloaded to the device before the event. Transactions supported include sales, activities, and balance inquiries (when online only).” Reporting, he added, is available from either the handheld or the company’s campus card system, Odyssey PCS/CS Gold.

Off-campus merchant options based on a college ID card system “are virtually limitless,” said Mr. Bonaduce. “The ability to capture data from an ID card, assign vendor points, decrement those points and ensure loyalty are present once an ID system and handheld programs are introduced. Desktop or Point of Sale versions of the handheld software could produce a suite of applications that tie in seamlessly with one another and provide a boon for local businesses near a collegiate campus.”

For example, PocketPoints, a decrement/increment application from VDS can be used “to track and distribute booster points,” Mr. Bonaduce added. “The Booster Club assigns one point for each sporting event attended by a student that is stored in the handheld. At special booster meetings or events, the students can redeem those points for prizes and rewards. This same system can be used to track drink and food tickets accurately to determine exact quantities of items that were given away versus those that were purchased.”

Sequoia has customers “who have used the devices for food delivery and even at locations such as off-campus coffee shops where student groups have held functions and needed to track attendance and charge admission to events,” said Mr. Diaz.

The company also has customers “who use them on shuttle busses whereby students must swipe their card upon entering the vehicle where they are then validated as to whether they are entitled to ride the bus at no charge or if they must pay for the trip,” said Mr. Diaz.

Some applications don’t even need a database or access to one. For example, you can verify the data on a driver license, ensuring that the data encoded on the magnetic stripe or bar code matches the info on the license. Similar software can also determine if the person holding the license is of legal age to purchase alcohol, said Mr. Bonaduce.

In General Meters’ case, a specially designed card reader attached to an HP iPaq enables card validation in a matter of seconds by a simple swipe of the magnetic stripe. “No external power is needed as the card reader is powered by the HP iPaq,” said Mr. Zander. “It, too, can verify a person’s age. Set Pocket 1Card to age verification mode, enter the age limit you want to verify and it will do the rest. The age is calculated based upon birth dates downloaded from the University One-Card System database.”

This handheld device gives system administrators the ability to use a wireless online connection to view patron information and reader status, lock and unlock doors, and perform system administration functions. “The AdminPDA also has a patron lookup feature which allows users to see demographics and pictures of cardholders,” he adds.

Bob Lemley, manger of CS Gold Development at CBORD, notes that “administrators can connect via Wi-Fi or cellular to monitor and control doors or view patron information. Plus, all of this is fully encrypted, using Advanced Encryption Standard (AES) on top of whatever network protection is in place.”

How about durability and battery life?

You get what you pay for, suggests Mr. Bonaduce. “Some of the devices are fairly fragile while others can be dropped from ten feet onto pavement and not receive a scratch. There are also third party suppliers that produce aluminum or steel cases for common handheld devices for further armor. Basically, if one is willing to pay for durability, obtaining a robust handheld device is possible. If cost is a concern than handling the device with care becomes a priority,” he adds.

Our readers can withstand the demands of the higher education environment,” said CBORD’s Lane. “Extra reliability is built into every aspect – from battery contacts to keypads to acoustics – to ensure they exceed the demands of daily, high-volume usage.”

“GMC rates each hand held for three to five years of use under normal operating conditions,” added Mr. Zander. “Most will last much longer.”

And Mr. Diaz from Sequoia notes: “Our wireless card reader applications run on rugged devices manufactured by vendors such as Symbol Technologies. These devices are much more durable than a standard PDA device. Customers can also purchase an optional hardware service plan which covers just about anything that can happen to the unit.”

Another thing colleges need to consider is battery life. “Most handheld devices can operate intermittently for up to ten hours without needing a re-charge,” says Mr. Bonaduce. “Rarely is a handheld device in constant use for more than a few hours at a time.”

Mr. Diaz agrees. “We support several different devices, but with our primary units, customers can expect run-times ranging from 10 to 14 hours of continuous use. This battery life can be greatly extended by doing things such as turning off the touch screen backlight after several minutes of inactivity and having the device automatically go to sleep when it is not in use.” Using these power-saving tips means a handheld can “be used over several days without the need to be recharged,” he said.

However, Mr. Bonaduce offers a word of warning. “Once a handheld runs out of power, nearly all of them revert back to factory settings when turned on again. This is due to the volatile nature of the memory inside the devices. Some manufacturers allow for a saved backup to be recalled upon start-up but any data obtained after the last backup is lost. Cradling (and thus recharging the batteries) is mandatory maintenance.”

The future of handhelds on campus: Bigger apps from smaller units

While handheld usage on college campuses has grown over the last couple of years, there is still much more to come. “Wireless, debit, access, financial and transit applications will continue to evolve with the size of the device continuing to decrease,” said Mr. Zander.

Security concerns will drive the growth in handheld usage, says Mr. Bonaduce of VDS. “Campus security, dormitory administrators and even faculty can utilize handheld devices to check the authenticity of a student ID, capture that student’s information digitally and record other crucial pieces of information with just the press of a button,” he says. “Once campuses understand the power that a handheld can bring to their security program, the presence of such devices in a collegiate environment will become as common place as radar speed detecting devices in highway patrol cars.”

Sequoia “saw a doubling of our wireless customer base in 2006 and we expect this growth to continue in 2007,” said Mr. Diaz. “We are also seeing many of the early adopters, who often started with just one or two units, placing follow-up orders for large quantities of devices as they’ve realized the benefits of using the handheld technology on their campuses.”

Handhelds have obviously made their mark on college campuses. As a user of CBORD’s handheld offering stated: “(It) is a great example of forward-thinking. It fills a niche that has been overlooked for a long time—a wireless, portable, small card reader … The uses are only limited by the imagination of the user.” 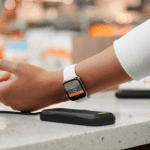