Often the subject of privacy concerns, biometrics is enjoying growing acceptance in higher ed, in part, because students are increasingly inundated and accustomed with the technology as a standard feature on mobile devices. This trend has been reflected at Georgia Southern since last year when iris biometrics were implemented at campus dining halls as part of an opt-in program to increase throughput at the door.

The adoption rate for Georgia Southern's iris system at campus dining halls has been nothing short of remarkable. "Since August 2013 we’ve seen more people opt to use the iris camera than to use their card to enter the dining facilities,” says Richard Wynn, director of the Eagle Card Office at Georgia Southern University.

The program has enjoyed so much success that the university has now expanded the use of iris biometrics to include access to its campus recreation center.

In partnership with the Eagle Card Program, the university’s Recreation Activity Center (RAC) now offers students the option of iris photo recognition for quick, hygienic, hands-free entry into the facility. Iris technology will be the third in a series of entry-methods that are part of RecTrac, the center’s entry system. Students may alternatively present their Eagle Card at the front desk or use the fingerprint scanning technology to enter the facility.

Previously, Georgia Southern’s Campus Recreation used a fingerprint biometric for entry, but that method proved to be problematic. With the success of the iris camera technology in the residential dining facilities, Campus Recreation officials contacted Wynn about extending the iris service to their location and enabling students to continue to use a form of biometric entry that they were already comfortable with. As Wynn explains, it was mostly an ease of service situation.

“The RAC’s incorporation of this technology is a perfect example of how using this system across campus can provide secure, accurate and seamless access for our entire Georgia Southern community,” says Richard Wynn, director of the Eagle Card Program. “The two-million entries in our dining facilities over the past two years are proof that the expansion of iris entry will be successful in other parts of campus.”

“Since unveiling iris on campus, an average of more than 3,400 freshmen have enrolled in the program each year,” adds Wynn. “And with the expansion to the RAC, even more upperclassmen have enrolled.”

The IRIS Camera System uses a biometric device that digitizes a photograph of the user’s eyes and creates a template. This software then stores the template of the iris pattern (D-TIP). When a user accesses the IRIS Camera System, the D-TIP is compared to the recognition station to allow access.

Georgia Southern Informational Technology (IT) Services is currently exploring additional use cases for iris access in other areas of campus, including an art building. “As they review and monitor the implementation in the RAC, they'll further explore its application elsewhere,” says Wynn. 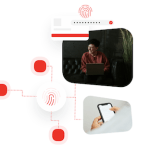