Lost ID card? It will cost you

While some students may complain when they have to fork over money for a replacement student ID card that was originally free, most have little choice if they want to keep availing themselves of the university’s services.

Still, CR80News wondered what was the going rate for lost or stolen cards. We interviewed 20 campus card administrators and discovered that replacement rates vary widely, from as little as $5 a card to $25. Some even had varying rates, depending on whether this was the first, second or third time a student may have lost his card, or whether he was trying to replace a simple mag stripe card or one with more advanced technology on it.

The responses from campus card administrators pretty much track a “Benchmarking Survey” conducted six years ago by the National Association of Campus Card Users, which listed universities charging from $5 to more than $25 for a lost or stolen card. Two thirds of universities responding charged either $10 or $15. Keep in mind these are six-year-old figures.

As to how many damaged cards a university replaces annually, a third of the respondents said 500 or less, while another 22% indicated they replace from 501 to 1,000 cards annually. Another 15% said they replace 3,001 to 5,000 cards yearly.

Most colleges, 85%, said they charge a flat replacement card fee, while the remainder indicated they do have a sliding scale.

Have to charge something

Alex J. Herzog, director of One Card operations for the University of Nevada, Las Vegas, probably best summarized the reason most universities charge a replacement fee. “If you don’t charge a fee for the card replacement, students will be less responsible for them.”

The university charges “$20 for lost or stolen IDs. We kind of follow our state Department of Motor Vehicle rules,” says Herzog. “They certainly won’t give out a free driver license if you lost it or if it was stolen.”

Here are some of the responses from CR80News’ mini-survey. Then we’ll provide you some suggestions on how to figure what it costs the university to produce a card, which may give you a better benchmark on what to charge students.

The University of Rochester in New York charges $10 to students but nothing for faculty and staff, says Cheryl Kilts, manager of the customer service center. Also levying $10 is the University of North Carolina at Chapel Hill, reports Jim Clinton, director of operations for UNC’s OneCard.

Tompkins Cortland Community College, Dryden, N.Y., also charges $10 for lost or stolen cards, but if students only need to replace a worn-out card, as long as they bring in the card, the new card is free, says Tova Sturmer, TC3 card manager.

Other schools follow similar procedures. For example, California State University, Sacramento, levies $15, says Gina Lombardo, OneCard manager. However, she adds, if the card is stolen and the student can produce a police report verifying the theft, the charge will be waived. The replacement cost was $9 but it went up to the current $15 in mid-August this year, Lombardo adds.

Students at Colorado University in Boulder will only pay $5 if the card is stolen and the student can produce a police report. Otherwise, the charge is $25, says Lawrence Drees, campus card program director.

Purdue University, West Lafayette, Ind., charges $20, says Wayne L. Hilt, card services manager. “The only time we do not charge for lost ID cards is when we have documentation that the card was lost in a home or apartment fire. We do not want anyone going back into a burning building to retrieve an ID card. That occurs very infrequently, but we have had a few cases over the last 13 years.” Purdue’s replacement fee has remained steady at $20 since 1991.

Mark McKenna, program director, CATcard service center, University of Vermont in Burlington, says the replacement fee is $3, but that’s only if the original card is surrendered. If it’s lost or stolen, the charge is $15 to replace.

He says the University of Vermont used to charge $10 for the first card and $20 for every card after. “We changed after 11 years to a flat $15, mostly to eliminate the price difference.”

Two other schools charge $20. Anthony Smucler, coordinator for the campus ID office at Central Michigan University, Mount Pleasant, says that $20 price “has been in effect since 1996 and I do not have any plans on raising this cost in the next few years.”

Rowena E. Dunn-McKenzie, director of the PBACard and support services at Palm Beach Atlantic University, West Palm Beach, Fla., says that while students pay $20 for lost cards, employees don’t have to pay anything.

Also at the upper end is the $25 that George Washington University, Washington, D.C., charges its students, says Kenneth Pimentel, director of the GWorld card program.

Carolyn Hartley, ID card services manager at the University of New Mexico, Albuquerque, says her school offers a sliding scale for replacement cards: $10 for the first, $15 for the second and $25 for third and subsequent replacements.

Hartley says the initial replacement fee “held steady at $10 per card until the fall of 2006 when the sliding scale was instituted.”

A similar sliding fee is in place at Babson College, Wellesley, Mass., says Steve Heaslip, manager of auxiliary services. It’s $10 for the first two, $20 for the third, $30 for the fourth, per academic year, he adds.

What does a card actually cost?

Even many campus card providers found it difficult to come up with precise numbers or a formula because of the number of variables that might be included. Estimated replacement costs varied widely.

At LSU, which charges $15 for lost cards, it costs the university $6.29 to produce each card, the university’s student newspaper reports.

Angelo State’s Wilson says it costs the university about $20 “for all of the pieces involved,” which would include material costs and the labor to reproduce a card. So it’s a break-even process for the university.

“I’m sure (staff time) is the most expensive part of duplicating a student ID,” says the University of Southern California’s Brenda DeLong, director of USCard Services, which charges $18 for a replacement card. She says USC isn’t allocated to include staff time. That’s “viewed as a fixed cost.”

Tompkins Courtland CC’s Sturmer estimates that “based on staff time, supplies and overhead it’s roughly $4.74 per card” to produce. “I use regular mag stripe cards and have gotten some smoking good deals on supplies.”

“This is a difficult question to answer. Blackboard is the most expensive part of our card office so you would need to factor all of that into the cost,” adds California State University’s Lombardo.

University of New Mexico’s Hartley estimates it costs the university about $3.50 to reproduce the card.

Purdue’s Hilt says it costs the school $10, which “includes the supplies, the equipment depreciation, and labor.”

While even campus card providers found it difficult to produce a generic formula on replacement card costs because of the number of variables involved, Bill Norwood, chief architect at Heartland Payment Systems Campus Solutions, has some suggestions.

“To calculate replacement card costs, a school should determine how many cards its students lose – which, on average, across the country – is approximately 20%,” says Norwood. “That means a school with 20,000 students will replace 4,000 lost stolen cards annually.”

These are not figures he pulled out of the air. They come from experience. He managed the card program at Florida State University in Tallahassee for eight years, plus he has done work at other schools–the University of Central Florida, Orlando, and Slippery Rock University in western Pennsylvania. “Others report the same numbers, after 15 years of talking with schools, consulting, etc. It always comes out around 20%. Some are higher and occasionally one is lower. The lower number usually comes from the schools that have a large graduate/adult enrollment base,” he says.

The school with 20,000 students will produce another 5,000 new cards for incoming students, usually about 25% of the population. “This means the campus annually produces almost half the number of its ID cards, taking approximately 25% of the staff’s time on an annual basis,” he says.

Replacement cards costs start with a blank piece of plastic with a mag stripe that costs around 20 cents. From there, adding a smart chip to the card increases the cost – including a licensing fee for associated software – to around $5 per card. “At this point, the card is still blank plastic. If a school chooses PROX, then the cost is even higher – up to $7 or $8 each, again still blank,” he says.

The only added cost is the price of the printer ribbons used to produce the front and back of the ID card. This adds about 50 cents more to the card’s cost.

“However, keep in mind there are incremental expenses for card printers, which, on average, cost $4,000,” says Norwood. “A larger school – 2,500 students and up – requires several printers to process students in a timely manner during orientation and carding events. Most printers are replaced approximately every four to five years.”

He says staff costs to produce replacement cards should be considered “part of the day-to-day operation of the card office. At a school with 20,000 students, the card office will spend 15% of its staff time on carding. This assumes three people in the card office but doesn’t include technical support or service technicians. The cost for these three people can be approximated at $80,000 as many schools use student help, reducing staff costs considerably.”

Of that $80,000, allocate 15% for time spent on lost and stolen card replacement, which is approximately $12,000. Figure the same for the hardware amortization, and that comes to around $600 per year, he adds. “The cost for just one card – not smart card or prox – printed just once is around 70 cents.”

“A school can determine its actual costs by plugging in its numbers for all of the above. Many schools do not include the cost of staffing as these employees usually perform other job functions as well.”

Cindy McCall, CBORD’s vice president of marketing, has one suggestion that could keep card costs down. “Something to consider in pricing replacement cards is the difficulty in ordering just a few cards at a time if the backgrounds are pre-printed,” she says. “Minimum order quantities for custom-printed cards can be as low as 250 or as high as 2,500, depending on the source.”

And, she adds, universities should “also keep quantity in mind when pricing printer ribbons. For example, if a ribbon costs $100 and prints 500 cards, each card would only cost 20 cents for use of that ribbon. The price becomes more significant when you have multiple replacement cards to create.” 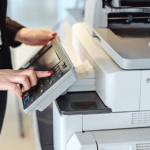