Laser engraving is nothing new, but the price is dropping and more customers are looking at the security feature, says Jonathan Bowen, sales manager at Digital Identification Solutions. The Greer, S.C.-based company released the EDIsecure LCP 9000 Laser Color Personalization System last year, one of the first desktop laser engraving systems that sells for less than $100,000.

Digital Identification Solutions is targeting the printer to the driver license and government markets in the Americas, Bowen says. “Those who have huge issues with forged and faked cards are our primary customers,” he says. The company is expecting to ship its first units this fall.

How does laser engraving work?

Laser engraving is a technology that burns data into an ID card or data page in a passport. It enables standard text and images to be added as well as special security features such as microtext, tactile data, perforated images , and variable images that change with different viewing angles.

Laser engraving can be conducted on various materials, but it works best with documents made of polycarbonate. When a laser beam is applied to the polycarbonate substrate, the heat causes a chemical reaction that essentially burns, or carbonizes, a minute area changing it from white to black. Repeated and controlled application of the laser creates the text and images within the card.

This carbonization process occurs at the material’s core and extends up to the surface of the document. Thus laser engraved data cannot be scratched or peeled off of the document because it truly becomes a component of the card’s construction. The ability to modify a valid laser engraved document for fraudulent use is virtually impossible.

When a laser is applied to a specially-designed polycarbonate card, it penetrates the transparent outer layer and reacts with a carbon-enriched layer. This reaction creates a dark colored material that moves through the card to its surface. Both the front and the back of the card can be engraved separately.

As governments are looking for better ways to secure documents many are finding a solution in laser engraving. “The predominant way of creating images on a card was dye transfer but many are transitioning to laser engraving,” Dyball says.

But with dye sublimation printers a fraction of the cost of laser engraving why make the switch? “Laser engraving makes it difficult to remove or alter the card information,” Bowen says. “The normal person who wants to fake the card won’t bother with it, he’ll move on to another target. It’s also expensive enough to keep the criminal element away and technical enough to where if he got it he wouldn’t know what to do with it.”

Laser engraving actually burns the information into the card, Bowen says. “It burns through the top level and reacts with the inner card body,” he says. “It’s impossible to scratch the information off or remove it with chemicals.”

Information can sometimes be removed or changed from cards printed on dye sublimation machines, Dyball says. “The image is essentially at the surface,” he says. “You can then put a overlay over the dye transfer image but even when you do that you can peel off the patch and take solvent or a mild abrasive and remove it and the fraud would be difficult to detect.”

Dye images can also suffer over time, Dyball says. Temperature and humidity can affect the images over time causing them to fade.

Laser engraving also creates a tactile security feature on the card, Bowen says. When the information is burned into the card body it creates raised ridges that can be felt, similar to an embossed credit card. “When a state trooper pulls someone over and only has a few minutes to validate an ID the tactile feature is great,” he says. “It’s virtually impossible to forge on a desktop printer.”

To enable this feature an issuer has to make some changes to its card stock manufacturing process and place a small lens on the card body. The laser will then burn the information in at different angles to enable the feature. “It’s a security feature you can see with the naked eye and it’s impossible to create with any other type of desktop printer,” Bowen says.

Laser printers have another advantage, no consumables, such as printer ribbons, Dyball says. People with widely distributed issuance sites are looking at laser engraving because of the savings on consumables,” he says. “You have an upfront investment but savings over time.”

The high cost is one drawback to laser engraving, another is the inability to print color images, Dyball says. “Laser engraving over the past few years have gotten better at gray scale images,” he says, noting that current engravers can modulate the pulse of the laser and get much better gray scale images.

Some still want color, though, and use both dye sublimation and laser engraving. “We have a customer in Italy who buys the card bodies and color prints the photos and laser engraves the text,” Dyball says.

As counterfeiters get more sophisticated and governments want to increase security, laser engraving is one solution they may look at.

This summer, the State of Virginia’s Department of Motor Vehicles began issuance of a new, more secure driver license.

The ID has two laser engraved photos, one of which appears in a clear window that is visible from the front and back of the card. It also uses security lettering and ultraviolet features to verify authenticity.

The state has also moved to a centralized issuance model. Rather than producing licenses in the local offices, all credentials are produced in a secure, central production facility. Located in Danville, Va., the site is comparable to a credit card production center with high levels of security and restricted access.

Virginians still go to a local service center to apply for licenses and ID cards, have their photographs taken, and get a temporary 30-day permit to be used until actual card arrives via mail.

A Finnish company called Setec Oy brought laser engraving to the ID document world in the late 1980s when they began issuing engraved driver licenses in Finland. In 2005, Gemplus now part of Gemalto, purchased Setec citing the company’s “expertise in the security printing and polycarbonate business,” a clear reference to the laser engraving capability. The laser engraving process, however, is not patented and a number of companies provide the technology to the ID marketplace. 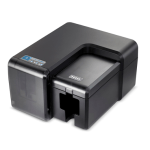