Door locks are a common point of discussion when considering campus security and the personal safety of students and staff. Whether for basic, everyday security, or for more serious scenarios like campus lockdowns, the hardware on the door is vital.

But aside from physically locking an entryway, what else could the hardware on the door offer in terms of physical security and safety?

Among its many security-focused efforts, Assa Abloy has recently refreshed the status indicator if offers for some of its mortise lock solutions to better safeguard classrooms, high-traffic campus facilities, residence halls and single-occupant restrooms.

The status indicator is a simple enough premise – a small screen on the lock that lights up green when the door is unlocked, and red when the deadbolt has been thrown. But the impact that this simple feature can have in both everyday use and in moments of crisis, in particular, can be quite impactful.

“When we talk about campus security, we break things down into the areas like prevention, protection, mitigation, and then response and recover,” says Lori Brown, Product Manager, Mechanical Locks, ASSA ABLOY. “What we’ve done with our door lock indicators and classroom security really hones in on the protect and mitigate areas.” 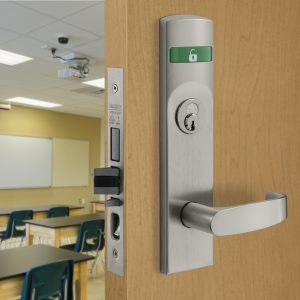 You’d be hard pressed to find a university that isn’t leveraging mortise locks somewhere on campus. These locks are routinely deployed in high-traffic, high-usage locations because they’re more robust than the average lockset.

Lock indicators, meanwhile, are available from a number of access control providers, but Assa Abloy has made a point to refresh its offering. Specifically, Assa Abloy’s Corbin Russwin ML2000 series and Sargent 8200 series mortise locks benefit from the newly upgraded lock indicators.

“We’ve added new features to our indicators because we’re seeing new applications on campuses in classroom security and safety,” says Brown. “We’ve made the indicators larger and more prominent, and we’re using new materials that make the indicator window clearly visible from a broader range of angles.”

Among the upgrades applied to the new lock indicators is a screen that's 25% larger than the industry average for more clearly visible verbiage and colors, as well as a new curved design that enables the occupants of a room to view the indicator window from up to a 180-degree angle.

The indicators themselves are strictly mechanical, consisting of a window that will change color, as well as display a lock symbol and the words “Unlocked” or “Locked” when the deadbolt is thrown. The mortise locks can also be configured to have either a thumb-turn deadbolt lock or key-turn lock on the interior.

“We can customize the indicator window with different colors and verbiage depending on the client’s request,” explains Brown. “But we’re primarily seeing campuses opt for the standard, recognizable configuration of red for locked and green for unlocked.”

The indicators are also ideal for privacy applications on campus like single occupancy or gender-neutral restrooms. For these applications the indicators can be installed on both the outside and the inside of the door to denote when the room is in use or vacant.

"In moments when you may have an active assailant, having a lock indicator on the inside of the door can go a long way. There’s a valuable human element to preventing someone potentially putting themselves in harm’s way to see if a door is locked or not."

“In total, we have up to thirty different functions for the mortise lock where our indicators can be applied, including classrooms, dorm rooms, restrooms, mother’s nursing rooms, quiet rooms, library and study rooms, and a full range of high-traffic entries,” says Brown.

While the majority of use cases for lock indicators will be for privacy or basic physical security, there are still those scenarios that are more vital.

“In moments of crisis when you may have an active assailant – high-stress, high-risk situations – having a lock indicator on the inside of the door can go a long way,” says Brown. “These are panic situations, and there’s a valuable human element to preventing someone from potentially putting themselves in harm’s way to get close to a door to see if it’s locked or not.”

When it comes to installing the mortise lock with indicators, campuses have two options. If starting from scratch, Assa Abloy offers a complete lockset kit, which includes the mortise lock body, the metal trim that fits over the lock, and the indicator offered as an optional add-on.

The second option is for campuses that may want to add indicators to existing compatible mortise locks. For this scenario, Assa Abloy offers lock indicators in an upgrade kit that contains only the indicator and can be easily fixed to existing hardware.