Could Host-Card Emulation be a difference maker on campus?

NFC deployments on college campuses have struggled to get off the ground, having been foiled by a number of hurdles, including difficulty with gaining access to the secure element within mobile devices. But could host-card emulation provide the key to unlock this puzzling conundrum?

Still a relatively new piece of Android software, host-card emulation could turn the tide and pave the way for a renewed NFC landscape. And with the challenges that the technology has traditionally faced on college campuses, host-card emulation may make it worthwhile for NFC to go back to school.

Host card emulation is a component of the Android 4.4 operating system; more affectionately referred to as KitKat, and is being pushed to Android devices everywhere. Host-card emulation represents an alternative to standard NFC card emulation – a technology that already exists within a number of NFC-enabled Android handsets.

With host-card emulation, however, this premise is taken a step further using a new method that does not involve a secure element at all. Instead, it enables an Android app to emulate a card and talk directly to the NFC reader, circumventing the hardware secure element altogether.

Host-card emulation essentially creates a virtual smart card, represented in software form, and hosts it in the cloud. It’s a technology that could greatly affect the structure and delivery of NFC services

Host-card emulation will open up full NFC capability – including operation of the reader functionality of NFC handsets – to app developers. This would give developers the ability to create applications that can turn handsets into contactless card readers, a function that certainly carries potential on the college campus.

NFC’s promise of using your mobile device as a card reader has long held promise for an array of applications and services, but it has seldom been utilized. But with an open development structure and the influence of Android’s market presence, college campuses could be an ideal proving ground for host-card emulation.

One resounding fact throughout the campus space is that students want to use their mobile devices for everything. The mobile credential is already here with many vendors offering solutions. Host-card emulation is perhaps best suited to facilitate proximity payments, at least initially. In order to make NFC applications viable in the campus space, however, the technology will need to enable more than just payments.

The college campus is a veritable melting pot of transactions that includes perimeter door access to residence halls, academic buildings and rec centers, as well as contacts at dining halls, athletic events and local merchants.

The SIMalliance also cites host-card emulation as an opportunity to drive growth for the entire NFC market. The industry association states that future deployments will likely constitute a mix of host card and SIM-based apps.

For NFC and host-card emulation to truly make an impact on campus, however, security must be central component to any progress made – a point that is driven home in Consult Hyperion/GSMA’s “HCE and SIM Secure Element: It’s Not Black and White” report.

“The mobile app (and the operating system on which it depends) does not offer the same levels of security as a hardware secure element and therefore alternative approaches to security are required,” the report states.

While NFC doesn’t seem poised to take college campuses by storm just yet, host-card emulation should inspire developers and campus card vendors alike to consider the possibilities, and maybe give it the old college try. 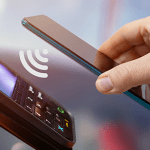