As we know, data–whether it is alphanumeric, audio, video, or other–can be represented digitally as a series of ones and zeros. This is called binary data and it is the basis of all digital communication. RF uses binary data to encode and transmit data via radio waves. Rather than zeros and ones, think of it as altered and non-altered radio waves. To transmit a number, we use a specific combination of altered and non-altered radio waves to ‘code' the number in a manner that is meaningful to the receiver.

There are three basic ways in which radio waves are altered or modulated in RF communication. They are amplitude modulation (AM), frequency modulation (FM), and phase modulation (PM). Sound familiar? AM and FM have become household names because of their use in the audio radio bands. PM is lesser known but used in many new RF systems.

Modulating amplitude refers to the process of altering the height of the radio waves. This is the original type of modulation which explains why AM is the oldest type of radio broadcast. As you can see in Figure 1, the frequency of the waves does not vary in the amplitude modulation, only the height of the waves. Amplitude modulation is the most common form of modulation used in RFID and is used in both the ISO 14443 and ISO 15693 specifications for reader to card communication.

Modulating the actual frequency of the radio waves is key to the process of frequency modulation. It is the changes in frequency that signify the zeros and ones in the binary communication. As you can see in Figure 2, the amplitude of the waves does not vary but their frequency does.

Modulating the phase of the radio waves can be thought of as bouncing the waves off of a mirror at a specific point in time–in essence, changing their up and down pattern to a down and up pattern and so on. It is the pattern of these phase changes that is used to signify the zeros and ones in the binary data during phase modulation. As you will notice in Figure 3, neither the amplitude nor the frequency of the radio waves changes–only the phase or direction of the waves.

So to summarize, modulation is the process of altering the carrier waves in a specific manner to signify meaningful data. Data is coded using binary zeros and ones that are represented through changes in the waves. These changes can be to the waves amplitude, frequency, or phase. Now you have the basics of modulation in hand. 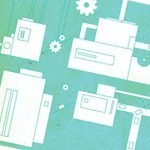 Choosing the right card printer for your comp...
|| TAGS: Technology 101
Subscribe to our weekly newsletter