California's Vista Unified School District has expanded the use of a biometrics system that sees students scan their fingerprints to purchase food at the cafeteria lunch line.

According to a report from The San Diego Union-Tribune, the biometrics program has reportedly led to expedited lines and introduced new layers of security for student accounts from theft or accidental misuse. Students are automatically enrolled in the fingerprint program unless parents request that they be excluded.

Despite the overwhelming proliferation of the technology across numerous verticals, notably on smartphones and tablets, there remain some critics of biometrics and fears of identify theft and privacy protection. As with any properly implemented biometric system, however, the solution at the Vista Unified School District does not store or share fingerprint images, and instead encrypts them in a way that they cannot be reverse engineered back to the student.

The system being deployed is Educational Biometric Technology's IDConnect solution. As with most systems, IDConnect scans fingerprints and applies a mathematical algorithm to generate a unique number for each student, and never stores images of the finger. When it comes time for lunch, students simply apply their finger to the scanner and a match is made to the student's lunch account.

The Vista district is no stranger to fingerprints in the lunch line, as the district first launched the program a year ago and has since installed fingerprint scanners at 19 campuses. This latest expansion will see the 20th of 22 schools in the district outfitted with the fingerprint system.

The use of fingerprint biometrics has alleviated problems with previously associated with the use of student ID cards and PIN numbers, allowing lunch lines to move more efficiently. PINs proved to be problematic, as students would routinely forget their PIN or share it others. Cards, too, were a problem as they were easily lost by the district's younger students.

Per the Union-Tribune report, the initial buy-in for the system was roughly $66,000, with maintenance carrying a $200 per building, per year cost. Overall the system has seen significant student adoption, with just four families across the entire district opting out of the program. 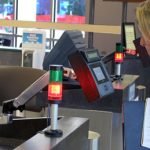 Be your own meal ticket... 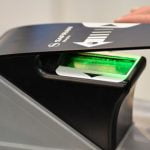