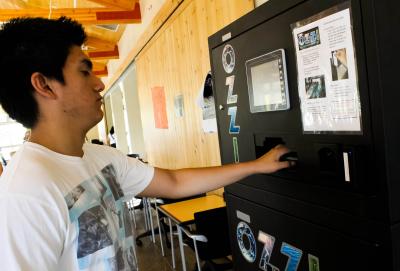 A new initiative at Marquette University is giving every freshman and sophomore student living in a university residence hall a reusable takeout container to be used at the university’s dining halls.

The container is called an OZZI and is a 9-by-9 inch plastic container that’s both microwaveable and BPA-free. Provided the initiative goes as planned, the OZZI will replace the estimated tens of thousands of disposable takeout containers that have long filled garbage cans in the campus’ dining halls.

As reported by the Milwaukee Journal Sentinel, black metal boxes located at the dining halls will collect and store the used OZZI containers 24 hours a day, seven days a week, holding them until they are collected to be washed, sanitized and air dried before their next use. When a student deposits a dirty OZZI in the machine, it spits out a token that students can take then to a dining hall for a replacement OZZI when they order takeout.

Each collection machine holds roughly 250 dirty containers. The machine stacks and stores the containers, and automatically sends a text message to the food service manager on duty when it’s 75% full, alerting the employee that the containers should be removed from the machine and washed.

As an added touch, the machines will tally the collection statistics at the end of each month and calculate – based on bar code scans of containers – how many trees were saved.

To jump-start the project, Sodexo Dining Services provided about 4,000 free OZZI containers to students in residence halls when at move in, along with free reusable coffee mugs. Each OZZI can be used anywhere from 300 to 350 times, according to Kevin Gilligan, general manager of Sodexo Dining Services at Marquette.

To put that into perspective, the Marquette Place food court at Alumni Memorial Union – the largest dining venue at Marquette – estimates that roughly 75,000 takeout containers were being thrown out each semester prior to adopting OZZI.

A number of students were also eating out of disposable takeout containers, rather than china, Gilligan says. Student would then routinely toss the disposable containers in the trash and not in a recycling bin.

The Marquette University Student Government spent a total of $45,000 on the initative, which includes two OZZI collection machines, containers, tokens and a year’s worth of maintenance. In the time since, a third collection machine has been installed at another of Marquette’s dining halls.

To date, more than 80 universities nationwide have adopted the OZZI containers. Marquette’s Gilligan explains that he and several Sodexo partners first saw the OZZI at Pepperdine University, where the results were very positive.

The solution is off to a promising start at Marquette, but there are still a few growing pains.

Marquette’s Student Government president hopes that starting next year, students will get credit for a new OZZI directly added to their student ID accounts, rather than having to carry around tokens.

The location of the collection containers is another area of concern, as students eat takeout food in their rooms. They then have to take the dirty container back to a machine in a dining hall to get a token.

While a damaged OZZI is replaced for free, if a student chooses to toss the container in the trash, they have to pay $5 for a replacement in the dining hall.

Thousands at risk of ID theft in latest UA ha...