The University of North Alabama has implemented mobile credentials with the aid of card transaction system provider, Transact. UNA students, faculty, and staff can all add their Mane Card to either Apple Wallet or Google Pay and use their iPhones, Apple Watches, or Android smartphones to access campus buildings, purchase meals, and more.

The Transact mobile credential initiative at UNA is a universal use case, meaning that UNA students can now complete any transaction that would have previously required a physical Mane Card with their iPhone, Apple Watch, or Android phone. The new program is called Mobile ID, and went live on November 2.

In a report from The Flor-Ala, UNA Mane Card manager, Linda Brocato, says she had been preparing for the move to mobile credentials for years.

“When I became the manager of Mane Card, we changed out our readers to go to a chip card with the intention of going to mobile credentials,” says Brocato in a Flor-Ala interview. “Once we got the ball rolling, we didn’t realize that we had to have multi-factor authentication, so we had to back off since the university didn’t have it yet. Once we got Duo, which was within the last year, we got the ball rolling again. We’re excited that we finally have it now.”

In terms of transactions, the new Mobile IDs work nearly identically to the previous Mane Cards. Students can now use their smartphones to gain access to campus facilities and residence halls on campus. On the payments side, students can tap their phones to complete any monetary transaction that the original Mane Card supported.

In future years, incoming students will have the option to either carry a physical Mane Card or be provisioned a mobile credential.

“The reason they don’t want them to have a card and a phone is because it bogs down the system even more,” explains Brocato. “Also, you can give your friend your card for meals or door access. You’re not going to give your phone to people as easily as you will a card. You can get mobile credential on your Apple Watch, too, but that’s it.”

While testing the system, RA feedback included an appreciation for the ease of use that a smartphone offers for door access and transactions. Some expressed concerns about the occasional inaccuracy of card readers and the possibility of phones running out of battery.

Apple devices carry a feature called Express Mode, which allows up to a five-hour window after the phone dies when students can still use their mobile credential.

“The main thing is convenience. Students and employees will have their phones with them. It keeps Mane Cards from getting lost and people from having to pay $15 for a replacement,” says Brocato. “You don’t lose a phone like you do a card. You keep up with your phone a lot easier.”

After students move to mobile credentials, they will no longer be able to use their physical Mane Card. The UNA system will search weekly for card duplicates – i.e. students who have both a physical and mobile Mane Card – and will cut the physical duplicate off, rendering the card unusable. 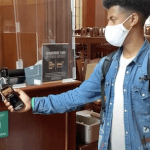