A group of grad students at the University of California, San Diego (UCSD) are in the process of creating what one of the students calls the “most over-designed soda machine in the world.”

Right now, the machine has attached to it a barcode scanner, a fingerprint reader, and a web cam for facial recognition. Want a Coke? Stick your thumb on the reader so the machine recognizes you as having an account, take out the drink, then walk way, never having had to reach into your pocket for change.

“I came up with the idea in June, 2005, but we didn’t get the soda machine until later that year. I had some discretionary money, so I bought a generic machine,” he said. “The biggest problem was putting through a purchase order for a ‘biometric soda machine.’ I got a few weird looks. I never actually gave the project the name. That came from the students.”

He said the computer science department at UCSD has had a soda and snack cooperative, nicknamed Chez Bob by the students, for some 20 years. “You would put in 50 cents and take out a coke. About 10 years ago, someone came up with the idea that you could log into a computer, list the amount of money you’re depositing into the (Chez Bob) account; then when you buy a coke, log that in against your account,” said Dr. Savage. “I thought, ‘Here we are a leading computer science program, we should have something better.’ So, I offered it as a project for the grad students.”

What SodaVision ended up becoming–and it’s still a work in progress–is what second year computer science grad student Tom Duerig calls “the most over-designed soda machine in the world.”

The students built the interface. “I had one guy design a touchscreen that looks like the one used in Star Trek. Somewhere along the way they added a camera and another group added a 2D laser barcode scanner,” said Dr. Savage.

The camera, a web cam, is for facial recognition, the next big step in the technology-heavy machine. “The students even wrote the software to recognize the images,” he added.

“Our goal is to have the soda machine simply recognize who is standing in front of it when a soda is vended or money is inserted to charge or deposit into the appropriate account. And thus was born SodaVision,” wrote Mr. Duerig in a paper explaining the project.

As he further pointed out in the same paper: The camera “is trained on users faces, which are added to the repository. Recognition requires detecting a face, morphing the face, running preprocessing on the face, looking up the face in the repository, running an election over many frames, and finally logging in the user with the most votes in the election.”

The brain inside SodaVision is a small computer designed for cars. It is stored inside the soda machine and is equipped with an Intel Celeron 2GHz processor with 512MB of RAM. The computer fit the students’ needs in that “it was very small, slow, quiet, and didn’t produce a lot of heat,” explained the 23-year-old Mr. Duerig. “We briefly considered putting a quad CPU 1U server in there as that would have fit, but we decided against it for heat reasons.”

“The students have been entirely cooperative in this project. It has created a tremendous esprit de corps, a lot of energy and excitement,” said Dr. Savage.

The machine is available to grad students, faculty and staff in a locked room accessible via a card reader on the door.

While the team of grad students concentrate on increasing the accuracy of the facial recognition software, Dr. Savage still utilizes just the fingerprint reader. “I use it every day, because I’m used to using the reader.”

“The only way to purchase soda is when you’re logged in (currently via the fingerprint reader). You can also deposit money into your account (through a slot attached to the machine),” said Mr. Duerig. When a user vends a soda, his/her account is automatically debited. A candy bar or other snack item is scanned with the barcode reader and charged against the user’s account.

Right now, the facial recognition part of SodaVision is carrying an 80% accuracy rate. “We’re shooting for 95% accuracy.” Eventually, the plan is for “dual recognition,” added Mr. Duerig. You sign in with your thumbprint, and then go for facial recognition. But until we hit the magic 95% accuracy, it isn’t integrated with the payment/purchase system,” he added. “I suspect we’ll hit that mark at the end of this summer for the unveiling of the project.”

While the camera is there primarily for humans, it can be used for other things as well. For example, said Mr. Duerig, “We’re looking at ‘facial’ recognition for bananas because they don’t have barcodes.”

During the summer, SodaVision sees 20 to 50 users a day, but during the fall usage picks up. “In the fall I get about 10 emails for every five minutes the system is acting weird,” said Mr. Duerig. 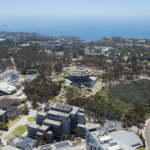