Connecticut's Westhill High School will begin printing the contact info for a suicide prevention hotline on the backs of all student ID cards thanks to the efforts of one of its students.

As reported but he Stamford Advocate, Westhill senior Alyssa Goldberg saw a post online encouraging students to advocate for schools to print the National Suicide Prevention Lifeline on the back of student ID cards and decided to petition her school to do the same.

Printing the hotline number on Westhill student IDs seems a fairly straightforward endeavor with images of the backs of the credentials showing no form of card technology, and plenty of real estate to work with. The student ID cards already display contact info for the school and its website. 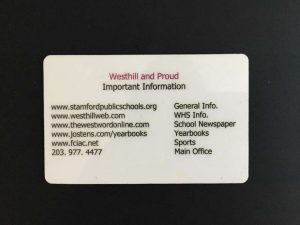 The Westhill High School student ID card will begin printing a suicide prevention hotline on the card's back side.

Printing suicide prevention hotlines on student ID cards has also been a topic of discussion at the collegiate level, with an increasing number of universities adding valuable resources to the backs of campus cards.

Westhill High School's principal has fully backed the idea and says the process of printing the number on the ID cards can be done through the company that takes students’ class photos and distributes the cards.

In addition to the hotline number and local advocacy groups, the high school continues to provide traditional services to students including offering assistance from guidance counselors and social workers.

The ID card initiative at Westhill has since spread to the neighboring Academy of Information Technology and Engineering, which has now also gained approval to add the suicide prevention hotline number to the back of its student ID cards beginning next year.