In early 2015, the results of an internal student dining survey indicated a need to change the University of Maryland’s dining program. But rather than simply refresh meal plan offerings, the university decided on a large-scale revamp that, among other improvements, incorporated advanced biometric technology.

“We were moving to an all-you-care-to-eat plan with unlimited access, meaning we had to support students with legitimate dining plans entering the dining hall as often as they wanted,” says Fuller Ming, Assistant Director for Information Technology at University of Maryland, Dining Services. “We needed a way to definitively identify the person with an active unlimited dining plan.”

Maryland Dining Services worked with a consultant and card system vendor, CBORD, where initially iris biometrics was suggested for dining hall access. But Ming and his team felt that a solution that leveraged traditional fingerprints would be more broadly accepted. That decision led Ming and Maryland dining to IDEMIA’s MorphoWave product.

IDEMIA's MorphoWave reader is a 3D fingerprint technology capable of scanning fingerprints and identifying people with a simple wave of the hand. The reader boasts high speed, touchless fingerprint acquisition. Users simply wave their hand above the device’s touchless sensor in order to be positively identified and gain access.

MorphoWave biometric readers went live at University of Maryland dining halls in August 2016. The university is now entering its third academic year, and sixth full semester with biometric access. “With MorphoWave and the selected dining hall turnstiles, we did all the procurement through CBORD by the middle of the spring semester 2016,” says Ming.

Without an established relationship between vendors, troubleshooting can be a challenge. In this way, CBORD’s partnership with IDEMIA is vital.

“CBORD has partnered with IDEMIA to provide the Morpho product line that can include a finger, finger and vein, or hand wave type of biometrics, says Wesley Urban, Solutions Architect at CBORD. “Solutions may include biometric only, biometric and card, biometric, card and PIN and card only options.”

"The lines actually move faster than before, nothing has to be rung-up by a cashier, and we cut the number of POS terminals to only one per dining hall."

The hallmark of the MorphoWave reader is fast, efficient and touchless throughput. “A major concern for a campus when introducing biometrics to a dining facility is the ability to process a large number of students during those peak hours between classes,” says Urban. “The speed and efficiency of MorphoWave is ideal for crowded dining halls and can be used in conjunction with turnstiles for quick and easy access.”

Biometrics has long been a key roadmap item for card system vendor, CBORD, with an increasing number of campus clients now looking to the technology for a wide array of use cases.

“CBORD was an early adopter of biometric solutions, but in the past college campuses only considered them viable for special situations,” says Urban. “Now, biometric devices can address a variety of campus needs with greater efficiency and lower cost than before.” 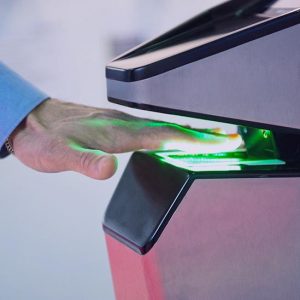 As part of CBORD’s smart campus vision, biometrics can be added to the company’s ID card, meal plan or access control systems, says Urban. “Access to dining halls for meal plans or all-you-can-eat facilities and rec centers is very popular,” he adds. “Residence hall access and access control to athletics facilities like locker rooms are quickly growing in popularity as well.”

Urban has also seen biometric solutions being incorporated for attendance tracking and niche applications like elevator control for luxury suites in stadiums. “Biometrics can be used in almost any situation where a standard card reader is used, which makes the technology attractive for any campus looking in the future to go cardless,” he says.

During the summer orientation leading up to the system’s full deployment, Maryland enrolled all of its incoming freshman that attended orientation so that when the fall of 2016 arrived, some 90% of the students on a dining plan were already enrolled.