George Washington University's dining services is contemplating an expansion to its food truck offerings by including a new initiative for its satellite, Virginia Science and Technology Campus.

As reported by the GW Hatchet, campus officials began a pilot program this month that has deployed food trucks to university's Virginia Science and Technology Campus to determine whether or not the trucks should become a permanent dining option. The initiative sent food trucks to the VSTC campus, which sits in a northwest suburb of D.C., twice per week.

GW Dining began talks with VSTC campus officials late in 2017 to determine the best times to deploy food trucks to the satellite campus. Officials have scheduled the trucks, worked through logistical challenges and assessed the pros and cons of the program over the last few weeks.

A surge in food-truck popularity in the heart of D.C. led, in part, to students and faculty on the Virginia campus expressing interest in having similar dining options made available at VSTC.

“While not a traditional urban location with high-volume pedestrian traffic, we are hopeful the concentration of students, faculty and staff at key VSTC sites will provide enough customers for which a food truck needs to viably operate,” said Alicia Knight, senior associate vice president of operations at George Washington, in a Hatchet interview.

Four different food trucks have each made one-day visits to the VSTC since the program started and remain on campus for a few hours at a time, serving students, faculty and staff from a central location on campus.

George Washington has deployed food trucks at its flagship campus in the heart of Washington D.C. as far back as 2016, and the response has been positive.

Dining variety is at a premium for the satellite GW campus, however, particularly as VSTC does not boast its own campus dining hall. Dining options are often restricted to students leaving campus, which can be time consuming in the middle of the day, or bringing meals from home.

“I think that it helps to offer a variety of things to the staff and faculty of the University,” said one of the food truck operators in a Hatchet interview. “It’s a nice break for me, it’s a short service, and people were very nice there. At least there’s an option there for them now.” 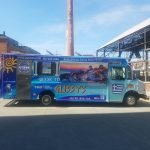 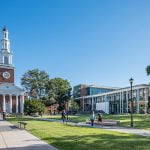 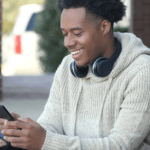